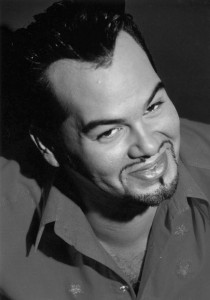 Born and bred in Cape Town, Terence Bridgett began his schooling at the Drakensberg Boys Choir School, matriculated at SACS and graduated from UCT Drama School with a BA Performers Diploma in Speech and Drama and a Fleur du Cap nomination for Most Promising Student.

Two years on the boards in Cape Town saw him in various dramas, comedies and musicals, as well as his favourite: Shakespearian productions. ‘Twas, in fact, The Bard that sent him North. Clare Stopford’s TWELFTH NIGHT brought him to Jozi in 1998, where his subsequent stage production, BABES IN THE WOOD, earned him a VITA nomination for Best Actor in a Comedy Role. After his television debut in HOTNOTSGODE, Terence appeared in various dramas and sitcoms before landing the role of Chico Booysens in SABC 3’s ISIDINGO – a role which garnered him an AVANTI Award for Best Supporting Actor in 2001. Dubbed by the media as South Africa’s ‘Soap Slut’ after his subsequent appearances in 7DE LAAN and BACKSTAGE, he is proud of his association with such local productions as ZERO TOLERANCE, SNITCH, THE LAB and the Canadian co-production, JOZI H.

For his sins, he can also be seen in a bevy of seriously B-Grade international features playing everything from a Mexican astronaut to an Arabic retard! He is therefore ecstatic to have appeared in DISGRACE with his favourite actor, John Malkovich. In 2004, together with actor and entrepreneur Rowan Cloete, Terence launched 8Ball Productions – a theatre company which since then has mounted CRIMES OF THE HEART, PLOFSTOF, THE UNVARNISHED TRUTH, the 25th anniversary production of POPPIE NONGENA, the critically acclaimed LOVE! VALOUR! COMPASSION! and three seasons of the box office success, MY NIGHT WITH REG – which landed him a Fleur du Cap nomination along the way. While we’re on the subject of awards, Terence is proud to have been elected by the public vote as ‘SA’s Favourite Actor’ for 2010 at the YOU SPECTACTULAR.

On the musical stage, Terence has shaved his head as PHAROAH in Paul Warwick Griffin’s JOSEPH AND THE AMAZING TECHNICOLOUR DREAMCOAT, shed 15kg’s (and most of his clothes) for SATURDAY NIGHT FEVER – THE MUSICAL, and donned a 4 foot purple wig opposite Tobie Cronje in the Baroque comedy, SING, played the Fox in PINOCCHIO, and will soon be HEROD in Pieter Toerien’s JESUS CHRIST SUPERSTAR in April this year

Having recently wrapped on the British-Canadian mini series, ROUGH, Terence has recently screened on the 2nd and 3rd seasons of ERFSONDES and THE LAB respectively, as well as Paul Slabolepszy’s sitcom KONSTERNASIE OPPIE STASIE. His recent return to ISIDINGO was interrupted by yet another soap as he continues to live up to his media nickname of SA’s ‘Soap Slut’ and has moved on to another series – M-Net’s BINNELAND SUB JUDICE – having accepted another year, KYKNET audiences can expect to see him well into 2012.