These are all very appropriate explanations and acceptable for a town that lies peacefully and contentedly at the heart of South Africa’s richest sub-tropical fruit growing region.

Kings Walden was born of great romantic spirit. It was here in the 1930’s that a beautiful young woman stood spellbound at the mountain views and said to the man beside her: “I never want to leave.” He was the owner of the land and the view. “Marry me” he replied “and you never have to leave.”

Many, many years later on the night she died here, lightning struck the enormous blue gum tree at the viewpoint. It is still standing today, bone-white and dramatic, a symbol of Kings Walden Garden Manor’s magical romantic spirit and history.

For more information on the Kind Walden Manor, you can visit: www.kingswalden.co.za

There are many legends about the origins of Queen Modjadji. In one version, there was an old chief in the 16th century Karanga kingdom of Monomotapa (southeastern Zimbabwe). He was told by his ancestors that he must impregnate his daughter, Dzugundini, in order to bestow the princess with rainmaking powers and thus expand the wealth of his kingdom. This princess was called Modjadji or ‘ruler of the day’. Another account relates that the young princess Dzugundini was banished from her tribe after she was impregnated by her brother. She fled her father’s scorn and took some of his loyal followers and her rainmaking powers to the present day Venda region of the Northern Province. In the early 19th century, Modjadji’s tribe, known as the Balobedu, migrated further south to the fertile Molototsi Valley, where they founded present day Ga-Modjadji. This tribe was ruled by a Mugudo, a male leader who was a descendant of the original Queen. Threatened by family rivalries and concerned for the tribe’s future, he decided to impregnate his daughter, the new Queen Modjadji, and restore the tribe’s matrilineal tradition.

For more information on Queen Modjadji, you can visit: www.tzaneen.co.za/ice/modjadji_history.htm

High in the Lobedu Mountains near Duiwelskloof and situated next to the home of the fabled rain queen, lies the Modjadji Cycad Reserve, boasting some of the oldest and largest Cycad specimens on earth.

The 530 hectare Modjadji Nature Reserve, situated in the Bolobedu district of Lebowa, north-east of Duiwelskloof, contains one of the most fascinating population of plants seen in South Africa. Once the main diet of the prehistoric mammal-like reptiles that lived here, the Modjadji cycad (Encephalartos transvenosus) forms a unique natural forest which can be viewed in its prehistoric state thanks to its strict protection by succeeding generations of Modjadji (‘rain queens’), the hereditary rulers in the area.

Many of the visitors who visit this dairy and cheesery are astounded to find that there are absolutely no electrical or mechanical devices used in their whole cheese-making process. From the milking of the cows to the long stirring of the curds in the huge copper cauldron over an open fire, it is all done by hand.

The deep freeze and the lights run solely on solar energy is a huge surprise, especially in this day and age when almost everyone is heavily dependent on energy from non-renewable resources. When one tastes wegraakbosch cheese, you realise that it is not only the organic ingredients that are so wholesome but the principle, as well, that is embodied in these products. Here is a beautiful farm paving the way for the future.

For more information on Tzaneen and all of the above, you can visit: www.tzaneeninfo.co.za

In this haven for nature lovers, fishermen, bird watchers, hikers and adventure addicts you can fish, walk through scenic gardens or visit the nearby river. You can play tennis, table tennis, and darts or just relax at the swimming pool. For those who are keen on action and adventure, this will be arranged for you – refer our “adventure” page. You can also visit some of the local attractions as well as tea gardens and craft shops and end an eventful day on a sunset boat trip on the Ebenezer.

Situated in the beautiful Cheerio valley, home of the annual Magoebaskloof Spring Cherry Blossom and Azalea fare. Cheerio is surrounded by the impressive Wolkberg – the southern tip of the Drakensburg Mountains and pine and indigenous forests. It is close to the Broederstroom and Letaba rivers and the Ebenezer, Magoebaskloof and Dap Naude dams. It lies halfway between Polokwane (Pietersburg) and Tzaneen.

For more information on Cheerio Trout farm, you can visit: www.cheerio.co.za

Discover a magical place in Magoebaskloof, Limpopo Province – where mountain meets river and the spirit of adventure is born – MAGOEBASKLOOF ADVENTURES.

Situated near Haenertsburg, between Polokwane and Tzaneen on the R528 (George’s Valley), our adventure centre is an ideal stop over en-route to the Kruger Park or for a family holiday, a corporate team-building getaway or just a day out.

At Magoebaskloof we offer a range of adventure activities and team-building:

For those of you seeking a tamer alternative, bring your mountain bikes, hiking boots, bird books, binoculars and picnic baskets.
Whether you’re in it for the personal experience or taking on the challenge as part of a team, visiting Magoebaskloof will not only leave you feeling refreshed, but rejuvenated and ready to take on any challenge!

For more information on Thaba Metsi Adventures, you can visit: www.thabametsi.com

The Agatha croc Farm offers adventurous daily tours through the ranch, an opportunity to touch a baby crocodile and also to feed the bigger crocodiles, a curio shop and a local art gallery.

Some of our legends include Stompie, Milan, Rufus, John and Linky. Rufus is currently our biggest crocodile and 4,2 meters long and approximately 35 years old. Our Legends are certainly our biggest tourist attraction.

For more information on Agatha Crocodile Farm, you can visit: www.agatha-crocodile.co.za

“Come and see the largest Baobab in the world” 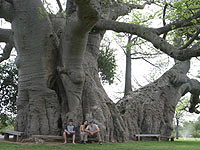 The Sunland ‘Big Baobab’ is in Modjadjiskloof in Limpopo Province, South Africa and is famous internationally for being the widest of its species in the world. Africa is symbolised by these magnificent trees. The Sunland Big Baobab is carbon dated to be around 6000 years old. The Sunland Baobab has even made the front page of the Wall Street Journal!

When baobabs become a thousand years old, they begin to hollow inside. In the Big Baobab this has resulted in wonderful caverns and caves, where the world famous Baobab Tree Bar and Wine Cellar now amaze visitors.

The Big Baobab is on the farm Sunland, an avocado and mangos. At the Big Baobab we can accommodate 20 people in 5 chalets. We also offer quad biking on our own quads or you can bring your own.

Doug and Heather van Heerden bought the farm in 1990 and cleared half, planting mangoes and Palm trees. The tree is important both historically and ecologically and is home to many animals and birds, as well as providing food for many others. The van Heerdens fiercely protect the tree and the surroundings – woe betide anyone who doesn’t share their views!

For more information on the baobab tree, you can visit: www.bigbaobab.co.za